WHY CHOOSE A SINGLE SPEED BIKE?

Single speed bikes are great for those looking for a simple and easy bike. Bikes for daily cycling or just the occasional spin, without the worry of regular maintenance or inefficient gears. They are great for the city, urban or leisure cycling.

WHAT TO LOOK FOR IN A SINGLE SPEED BIKE?

It's important to know where you plan to use the bike the majority of the time, eg city or suburbs, flat or hilly areas. Single speed bikes can be ridden for long periods, thanks to a rear cog that can be changed – for a higher or lower gear ratio – to suit your planned ride.

What's the difference between fixed gear and single speed?

Unlike a single speed, a ‘fixed-gear’ cog on the rear wheel does not allow a freewheel option. The pedals will always rotate forward (or backwards) so long as the rear wheel is turning. Commonly used on the track, fixed-gear bikes don't have brakes; on the road, the fixed cog counts as one brake, ie when you stop pedalling. Another is required, usually a front caliper, to be road legal. Freewheels are cogs that allow the rider to stop pedalling and cruise while the cycle is still in motion. A freewheel single speed is, as the name suggests, still just one gear but this can be varied in size for easier or harder pedalling. Many wheels have a ‘flip-flop’ hub, which features a fixed cog one side and a freewheel on the other. The wheel can simply be turned around, depending on your mood.

How do you know the right gear?

Gear ratio is determined by the number of chainring teeth on the front chainset and the teeth on the selected rear-wheel sprocket. The larger the gear on the front, and the smaller the rear, the more effort is required to turn the pedals – the bike will ultimately go quicker at high cadence. The smaller the front and larger the rear, the lower the gear. Therefore, less effort is required, which can be helpful on hills.

Pearson is a family run, independent cycling company. One of the first Pearson designs was called the Endeavour, an early example of a fixed-wheel bike. Over the years, we have continued to develop our beloved single speed and fixed-wheel bikes. Put simply, they are designed and built to last. At Pearson1860.com, we offer competitive prices on our single speed bikes. Unlike many manufacturers, who adopt a straight-from-the box, one-size-fits-all approach, every Pearson bike is built from the frame up. We will always check with the customer that they have chosen the correct frame size, then confirm the best fit before we build. This can happen before or after purchase. We offer free shipping on all our bikes in the UK. 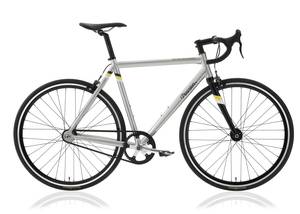